Long ago, and far, far away, the illustrious book reviewer, and horror novelist, Joe and I did a buddy read of a book called The Odyssey. We had a lot of fun, so we decided to do something else.

Yeah. More on that later.

In the meantime, we decided to read “The Phantom of the Opera” by Gaston Leroux, and discuss our reactions to it.  Joe asked me some fantastic questions, and I did my best to answer them. Be sure to check out Joe’s reactions over on her blog.

Potato Joe: Have you seen the korrigan dance in the surf?

Dumb Joe: I must confess that I know absolutely nothing about Korrigan’s.

I, too, am ignorant on the Korrigan. Apparently they are a type of Breton gnome. I haven’t met many French fairy folk.

Dumb Joe: I emerged fully grown from underneath a rock when I was 17. Sheltered is my middle name.

Potato Joe: What genre do you think suits this book best?

Dumb Joe: I’m not an ekspurt on book genres (expirt, eghzpurt?) but I do have a general sense of what doesn’t work. I enjoyed this book when Leroux was narrating it in his own voice, but whenever he pulled out his journalistic hat and started quoting his alleged sources in length I was really taken out of the story. My understanding is that Leroux was actually a drama critic who covered the Paris opera house, and this was originally published in serial format, so I wonder if he wasn’t going for some sort of War of the World’s effect where people thought this was actually legitimate reporting. If that’s the case it might have worked, had he been more disciplined in referencing his sources, but when the bulk of your material is entirely uncorroborated while a few chapters are ostensibly lifted entirely from supporting texts it feels like shoddy journalism. I think Leroux should either have entirely scrapped the faux-journalism idea, or incorporated it more evenly into the story.

I’m not sure if that’s what you were asking. But it’s something that annoyed me, and I wanted to rant about it.

Potato Joe: I’m not surprised this was serialised. It had the NaNoWriMo “where am I going with this? Doesn’t matter, it meets my word count” feel at times.

I love ‘found footage’ books (I know there is a literary equivalent word for it, but I’m dumb). Devolution by Max Brooks does it SO well. Leroux should read it to see how he should have written Phantom (What, he’s dead? Ah well, that’s a shame).

I think he was very much going for the ‘this really happened vibe’, but as you say, the inconsistency in the style was irritating and ended up distracting from the story rather than adding to it.

I think the serial nature of the original story also accounts for the very uneven tone. The goings on of the opera house at the beginning of the book are very humorous, the middle of the book is straight out melodrama and the ending accounts are more horror. It’s all over the place.

Dumb Joe: I agree. Leroux should have tried to read half as many books as you do. It probably would have helped.

Potato Joe: Who do you think loved Christine more, Erik or Raoul?

Dumb Joe:  Raoul actually shows some genuine concern for Christine. I don’t believe Erik ever does. Erik wants to use and abuse Christine’s talents in the service of his own ego, not because he actually cares for her. If Erik was just trying to be a normal, ordinary person, as the author claims at the end of the book, he wasn’t trying very hard. “Yes, I’ve helped numerous evil dictators build torture chambers for their political opponents, yes I’m a horse thief, I’ve imprisoned an opera star in my personal dungeon, exhumed her father’s grave and murdered a bunch of people, but deep down I’m just an ordinary guy.” Hmmm.

Potato Joe: Haha! You say it better than I ever could.

I think Erik is your typical narcissistic controlling monster. He didn’t love Christine. He didn’t even want her to love him, he just wanted a wife he could parade around with on Sundays and tell him how great he was.

A lot of adaptations make him out as a pathetic creature shunned for his physical deformities, but this is not the case at all.

Raoul was a bit dumb, but I think he did have genuine care for Christine.

Potato Joe:  What do you think Christine would have to say if she’d been able to tell her story?

Dumb Joe: I think Christine really wants to believe that Erik is the Angel of music who is giving her the gift of art, and that he is connecting her to her father beyond the grave. Christine’s journey from that belief, to the realization that she is being conned should be a really strong character arc. In some ways Christine is an incredibly strong character who is fighting for her dreams, and, in some respects, her father’s dreams. I wonder if she sees a connection with her father in her relationship with Erik even after she knows he’s not everything he claims to be, being that, like her father, Erik is also underground.

I think Christine is a very strong character. Parts of the story read like she was bouncing between two needy men who wanted her to reassure them and I would have loved to know what she really felt. Did she love Raoul, or did she feel flattered by his attention and didn’t want to hurt his feelings? He overreacted about everything! Oh, I saved your scarf as a child, you owe me.

Equally with Erik, he was like ‘I’m the angel of music, tell me I’m pretty or I’ll kill everyone.’

It seemed like she was in an impossible situation. A poor orphan who didn’t want to use her feminine charms to gain position in the opera. One man offered her career success, but at a steep price. The other offered her material security, but also at a price.

Dumb Joe: To be fair, saving a scarf is a pretty big deal.

Potato Joe: How do you think the novel has influenced literature?

Dumb Joe: For me, the most impressive thing about this book is the setting. Leroux paints the Paris Opera house so vividly that I feel like I am there, and I desperately want to be there! In some ways the setting is so pervasive that it feels like a character in and of itself. This book inspires me to create more interesting settings that play a bigger role in what I’m writing, and I suspect I’m not the first person who’s felt that way. But I have absolutely no evidence for that claim.

Potato Joe: I agree. What I loved best about the book was the Paris Opera House. I want to visit and explore the tunnels and basements and dungeons. It’s fascinating. 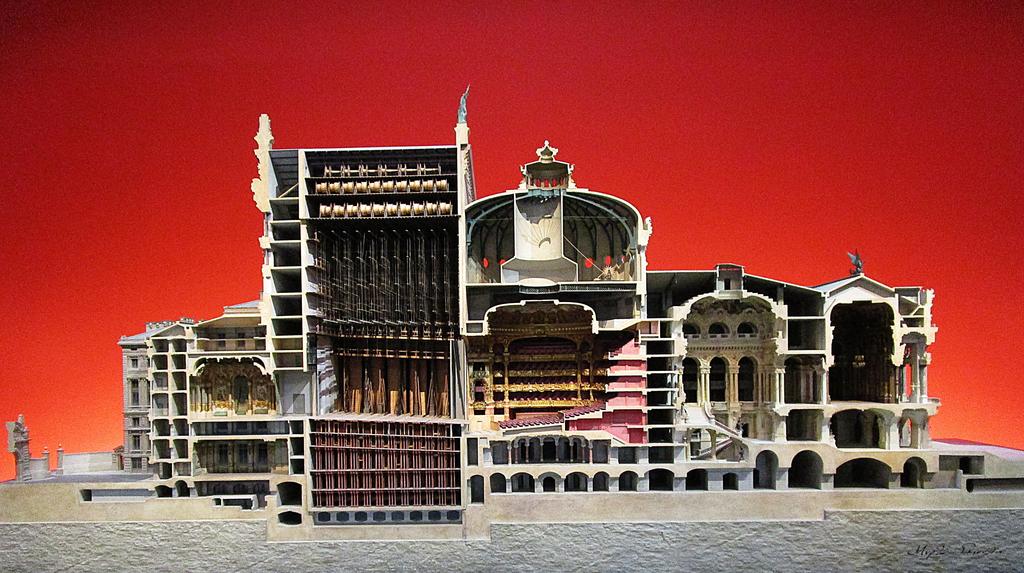 Model of the paris opera house by MyrtoGkiouli